The .gov means it’s official.
Federal government websites always use a .gov or .mil domain. Before sharing sensitive information online, make sure you’re on a .gov or .mil site by inspecting your browser’s address (or “location”) bar.

The site is secure.
The https:// ensures that you are connecting to the official website and that any information you provide is encrypted and transmitted securely. 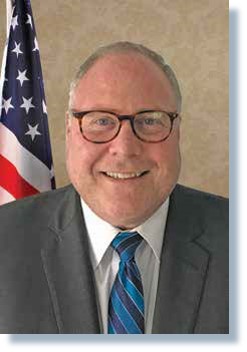 Mike currently serves as the Acting Director of the Bureau of Justice Assistance.  Previously, he served as Chief of Staff for the Office of Justice Programs.  He comes to the Justice Department from the Heritage Foundation, where he served as Senior Advisor for Strategic Outreach and as a member of the Presidential Appointments Team on the Presidential Transition Team.

This is Mike’s third term as an appointee of the Department of Justice.  Immediately after graduating from the University of California, Santa Barbara, he came east to work in the Reagan Administration for Attorney General Ed Meese as a speechwriter and press aide.

In 2004, Mike joined the Bush Administration as Director of the Police Corps, and later as Chief of Staff at the Office of Juvenile Justice and Delinquency Prevention (OJJDP), where he focused on the Attorney General’s gang reduction efforts.  He left OJP in 2006 to become Director of the Office of Faith-Based and Community Initiatives at the Department of Health and Human Services.

Mike has worked extensively on public safety issues throughout his career.  He was appointed by Virginia Governor George Allen, and later by Governor Jim Gilmore to run Virginia Exile, the Administration’s statewide gun violence reduction effort.

He used the success of his program as a model for a national program for then Presidential candidate George W. Bush.  It became known as Project Safe Neighborhoods and was adopted by President Bush as his signature crime reduction program and implemented by Attorney General John Ashcroft.  More recently, President Trump and Attorneys General Sessions and Barr re-committed to PSN as their top gun violence reduction effort.

Mike is a native Californian but has lived with his wife and three boys in Virginia for the last three decades.