Like many communities across Appalachia, Anderson County, Tennessee, is grappling with the opioid crisis.

Between 2010 and 2017, drug deaths involving opioids in Anderson County nearly quadrupled, increasing from 15 in 2010 to 56 in 2017. Over that span, 2014 was the only year in which opioid-related deaths did not increase from the previous year.

For Dave Clark, the Anderson County District Attorney General, impacts of the drug problem are felt in many ways. 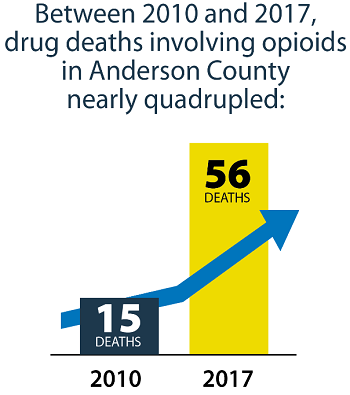 The county jail, for example, held two prisoners on Christmas Eve in 1982. In the ensuing 37 years, Anderson County's population remained relatively flat – increasing by only 8,000 residents, or 12 percent – but the jail population hasn't followed suit. Today, the jail holds upwards of 530 inmates, many of whom are serving sentences for drug-related crimes, according to Clark.

"We are in a convergence point with methamphetamine and opioids in East Tennessee. We seem to have both in abundance," he said.

To combat the drug issues affecting Anderson County, Clark joined local law enforcement officials to secure funding from the Bureau of Justice Assistance (BJA) to launch the 7th Judicial District Crime Task Force. Launched in 2010 through BJA's Edward Byrne Memorial Justice Assistance Grant (JAG) Program, the task force brings together narcotics officers from around the county to provide a level of expertise and dedicated resources that individual law enforcement agencies would be incapable of maintaining on their own.

Agents on the task force address narcotics and violent crime throughout the 7th District, frequently working with state, federal, and neighboring law enforcement agencies. There are currently five full-time narcotics officers from local departments assigned to the task force, according to Task Force Director Simon Byrne.

Throughout 2018, members of the task force worked with FBI agents to conduct a nearly year-long investigation of two overlapping methamphetamine trafficking organizations. During the investigation, more than one kilogram of meth was seized, as well as multiple firearms, some of which were stolen. Investigators identified and federally prosecuted 29 co-conspirators in the Eastern District of Tennessee and Northwest Georgia.

According to Assistant U.S. Attorney Caryn Hebets, more than half of the 29 individuals charged in the case have already pleaded guilty as of March 2019. Sentencing for these individuals will begin in June, with a trial for the rest scheduled in August.

"I don't think we'd be nearly as effective targeting drug trafficking without the help of task forces like the 7th [District]," she said. "They provide a lot of intelligence and a lot of assistance when a federal agency comes in and wants to help out." 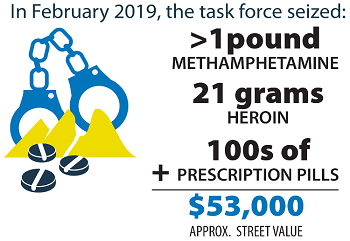 In February 2019, the task force served another search warrant that resulted in the seizure of more than a pound of methamphetamine, 21 grams of heroin, and hundreds of prescription pills. The approximate street value of the narcotics was $53,000.

Byrne described the heroin seizure as "absolutely massive," considering there is about one death per week from heroin overdoses in the area. Generally, the task force will come across heroin amounts in the range of two to three grams, he said.

"To lay across the table an ounce like that, especially a drug that's been killing people left and right in my community, it's pretty significant for us," Byrne said.

According to Byrne, the drug problem in Anderson County mirrors those facing hundreds of communities across the country.

Specifically, agents have seen a distinct change in methamphetamine trafficking over the years. Five years ago, task force agents would find meth labs scattered throughout the county, but that's a rare occurrence in 2019. The labs found today are old and abandoned. Instead, the narcotics now sold in Anderson County have been brought in from cartels across the Mexican border since they're cheaper and much more potent than what is made locally.

Byrne started as an agent on the task force in September 2015 and was promoted to director in September 2018 after the previous director, Russell Barker, was elected Sheriff of Anderson County.

"We learned rather quickly that everybody brought intelligence to the table that otherwise wasn't being shared because we weren't working very closely with the other narcotics units; we were all individual units," he said. "That, in and of itself, was huge."

Through the task force, agents have also been able to identify drug trends throughout the county. For example, crack cocaine was something primarily found in municipalities, Barker said, while pain pills and marijuana were found in both rural and urban areas.

Barker, who has spent the entirety of his nearly 20-year career in law enforcement in Anderson County, estimates that 90-95 percent of all crimes committed in the county are drug-related, including burglaries, thefts, and other offenses.

"It is what drives our crime in Anderson County," he said.

The Impact of BJA Support

While there are 31 task forces in Tennessee that investigate crimes involving narcotics, the 7th Judicial District Crime Task Force is one of just a few that categorizes itself as a drug and violent crime task force. A unique asset for the task force is its crime scene truck, which contains tools that most major metropolitan police departments have, but small or rural communities may lack.

"We don't need this every day, but when we do, we need it badly and in the past, it's just been unavailable," Clark said.

The truck is actually an old plumber's truck that was acquired from a government entity in Texas. It's been outfitted with technology that aids in pulling fingerprints, collecting gunshot residue or cell phone data, and other investigative needs.

"It really is an absolute mobile command center for any crime scene," Byrne said. "We're sure to keep it open for any agency that comes into our area that needs to use it."

Task forces have operated in Tennessee for decades, but Anderson County had been without one until the BJA-supported effort to form one started in 2008. The task force annually receives $51,000 from JAG, with the rest of its operations supplemented through civil seizures.

"Without it [JAG funding], we don't have a task force," Barker said. "Particularly in the beginning, it wouldn't have taken off and it wouldn't be standing today."

Since its founding, the 7th Judicial District Crime Task Force has become an integral part of combatting the opioid crisis and investigating violent crimes throughout Anderson County.

"It's been a huge difference maker," Clark said of BJA support. "These dollars have a gigantic impact."