Using surveillance footage from the church, law enforcement pulled photos of Roof and distributed them throughout the media. Immediately, calls came into the department identifying Roof and providing information on his potential whereabouts. Less than 16 hours after the attack, police had arrested their suspect, who was spotted in Shelby, North Carolina, nearly four hours away from Charleston.

Police were able to quickly identify and apprehend this dangerous felon, in part due to new technology that the City of Charleston Police Department had recently acquired with support from the Bureau of Justice Assistance (BJA). In March 2015, the department used funding from BJA's Edward Byrne Memorial Justice Assistance Grant (JAG) program to purchase a forensic video analysis system that expanded its digital examination capabilities.

Just three months later, no one could have predicted how the new system would impact the very first case in which it was used.

A Need for Forensic Video Analysis

Like cities around the country, law enforcement in Charleston had been observing a rise in the amount of video evidence collected from surveillance systems, officer body-worn cameras, and cell phone cameras from citizens.

"We were finding more and more often that we were in need of some kind of video or image enhancement and analysis," said Judy Gordon, Forensic Services Director for the City of Charleston Police Department.

In order to maximize the potential impact of forensic video analysis in investigations, the city used $36,000 in JAG funds to purchase a new system and schedule training for the staff who would manage it.

Digital Examiner Cpl. Rodney Van Horn and Audiovisual Services Director Jim Mossman received formal training on the use of the system and are two of the five staff members credited with establishing the policies and procedures under which it is operated. Also working on the project were Gordon, Jerry Roberts, and Maria Heffron.

According to Mossman, the new system better organizes the process of evaluating video evidence, makes recovering the video easier, and leads to higher-quality images as police are able to directly capture an image off the system.

Previously, law enforcement may have needed to film the actual video being replayed on a computer monitor if they couldn't extract the footage using their old tools.

Additionally, this system expands the digital examination capabilities of the department beyond computers and cell phones to video, image, and audio files.

On June 17, 2015, 21-year-old Dylann Roof participated in a bible study at the Mother Emanuel AME Church. When it was over, he shot and killed nine members of the church group. Among those killed was Clementa Pinckney, a senior pastor at the church and a South Carolina state senator.

When police arrived, Roof had already fled. Through the investigation, law enforcement sought to retrieve evidence from the church's video surveillance system. Unable to extract the footage using field extraction tools, Van Horn removed the surveillance system and took it to the police department's digital evidence laboratory for examination. 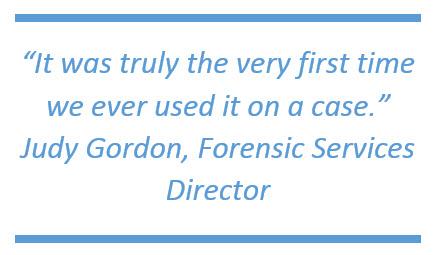 At the time, Van Horn had only recently participated in a training with the agency's new forensic video analysis system. Despite still learning the system, Van Horn was able to clarify several still images of Roof from the video with technical support from Mossman, who was actually in New York for a training session on this very system.

These images extracted by Van Horn were the first images of the suspect and the only clue to Roof's identity. They were released to investigators and the media. Within hours, Roof was taken into custody, a result of the police department utilizing its newly acquired technology to quickly identify a suspect.

According to Gordon, the agency was just days away from formally launching the new video analysis system.

"It was truly the very first time we ever used it on a case," she said.

Police have called Van Horn a vital contributor in the apprehension of Roof and the local Knights of Columbus chapter named him Policeman of the Year in 2015.