Trainings provide communities with the tools and knowledge to best serve court participants.

Across Illinois, more than 100 problem-solving courts support individuals with a behavioral or mental health disorder who are involved in the criminal justice system.

When the state began implementing standards for problem-solving courts statewide in 2016, a Bureau of Justice Assistance (BJA) grantee, The Illinois Center of Excellence for Behavioral Health and Justice, played a key role in supporting the courts through the process.

"There's been a lot of success in certifying problem-solving courts, and I don't think that would have been possible without the Center of Excellence, at least not in the timetable it's happened," said Mary Ann Dyar, the Program Director of Adult Redeploy Illinois, a state program that incentivizes local communities to invest in diversion programs. "At the end of the day, that means better services for the people who need them."

Research has shown that when implemented correctly, problem-solving courts efficiently use taxpayer money by reducing recidivism and providing offenders with appropriate services while diverting them from jail or prison. 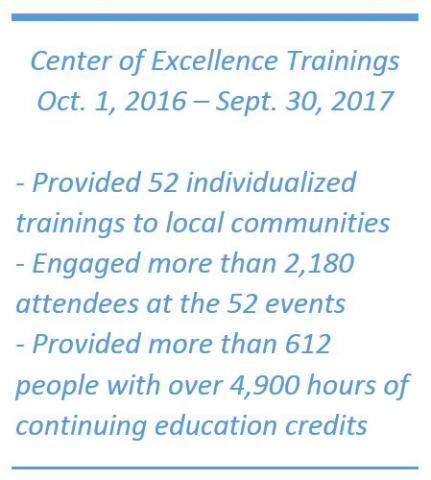 Since its founding in 2012, the Center of Excellence has provided training to people from all 102 Illinois counties. This means that more than 10,000 people have learned how to better serve court participants. Trainings provide the tools and knowledge needed to intervene in the opioid epidemic; reduce those in jails and prisons who have behavioral health disorders; and implement trauma-informed practices for justice system professionals.

The Center of Excellence also consults with communities as they plan to launch new courts and programming.

In 2013, Effingham, Fayette, Clay, and Jasper counties were considering the addition of a Veterans Treatment Court. But following a two-day training, officials decided to launch a mental health court that included a track to serve veterans. This enabled the jurisdiction to support more people while achieving the original goal of expanding services for veterans.

Since opening, the mental health court in Effingham County has served 49 people. According to Kayla Schumaker, a grant manager with the court, nine have successfully completed the program and 30 are currently enrolled, including two who are expected to graduate in June.

In addition to the Effingham County court, 15 other problem-solving courts opened in Illinois in 2013. The center provided similar trainings to 11 of them, according to Michelle Rock, executive director of the center.

While Florida, Massachusetts, Ohio, and Pennsylvania also have Centers of Excellence supporting statewide mental health services, each center's services are unique to its state. The Illinois Center is the only one that focuses on providing intensive training sessions and technical assistance to its problem-solving courts.

According to Rock, the center offers more than 60 training topics related to the intersection of mental health, substance abuse, and criminal justice. Topics range from Sequential Intercept Mapping to trauma-informed care or best practices standards.

Additionally, an annual conference organized by the center attracts an estimated 600 attendees from Illinois problem-solving courts every year.

Since its founding, the Illinois Center of Excellence's technical expertise and collaboration has supported projects of Adult Redeploy Illinois and the implementation of mandated state problem-solving court standards, thereby improving the quality of programs provided by courts across the state.

"We know that coming out of prison and jail, people don't fare well," Rock said of those with behavioral or mental health disorders. "They're not getting the treatment they need. Keeping them in our communities and giving them the appropriate treatment has better results than locking people up."