Creative writing sessions and a reentry program provide youth with an outlet for self-expression and structure to help prevent them from reoffending after their release. 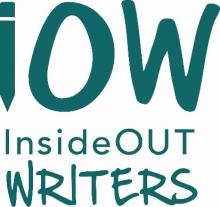 As a 16-year-old in a Los Angeles juvenile detention center in 1996, Jimmy Wu was like any other youth in his situation. He was searching for any opportunity that would allow him to spend time out of his room.

For Wu, that opportunity came when Sister Janet Harris, Chaplain of the juvenile hall, approached him with an offer. Harris was forming a creative writing class and recruited Wu as one of the first students. Wu acknowledges that he wasn’t interested in writing at the time, but he accepted the invitation to participate in what would later become known as the InsideOUT Writers (IOW) Program.

Now 37, Wu looks back on that experience as a critical moment. Sentenced to 15 years in prison, he would serve 13-and-a-half years from 1996 to 2009. Facing the challenges of prison as a young man, Wu believes the lessons he learned in his writing classes helped him to remain true to himself while incarcerated as he would stay up late at night writing while others slept.

“When I was transferred to state prison, the one thing that I always share with people is that I really give credit to InsideOUT Writers as being my salvation, my way to survive prison and not have to resort to any type of substance abuse, suicide attempts, or anything like that,” he said.

Initially, Sister Harris had no intention of forming a non-profit around her concept of a creative writing program, but InsideOUT Writers has grown immensely over the past 21 years. Today, more than 1,500 youth participate in classes annually across California.

In addition to the weekly creative writing classes offered, IOW now includes an alumni program that supports former students once they are released from prison.

The Bureau of Justice Assistance (BJA) supports IOW through the Edward Byrne Memorial Justice Assistance Grant (JAG) Program. Since 2015, IOW has received $50,000 annually from JAG with JAG dollars funding about 90 percent of IOW operations in its alumni program.

Recidivism rates for youth involved in the juvenile justice system have been persistently high for a number of reasons, but it’s not because nothing works. Programs and practices that promote positive development and use cognitive behavioral approaches have been shown to generate substantial improvements in youth outcomes.

While incarcerated, youth in the IOW Program benefit on the inside from creative writing classes, introspective journal entries, and writing retreats. After their release, on the outside, students are connected with mentors, writing circles, group outings, and other resources that help them with the challenges associated with reentry.

According to Wu, less than 10 percent of IOW participants reoffend after they are released.

Since its founding in 2009, the alumni program has served more than 400 young people and has partnered with over 50 community organizations to provide programming and services that meet the needs of participants.

Lorena Villanueva is a junior case manager with IOW, supporting alumni who may need help with employment, housing, education, or counseling. If Villanueva can’t personally help, she’ll connect the alumni with the appropriate community agencies.

Villanueva, 22, has been working for IOW since March 2017, but her experiences with the program go back much further. She was once a student, participating in writing classes while incarcerated and attending outings planned with the alumni program after her release.

Released in 2015, after more than 2 years in prison, Villanueva had been able to find a job, but readjusting to school and family life was difficult. The support system she had developed in prison was no longer there, and at times, she believed she wanted to go back inside.

“Everything was very overwhelming for me,” she said.

But after a mentor suggested she reconnect with the IOW Program, things turned around. Traveling to an IOW alumni event, Villanueva met Ashley and Jaki, two women who had served longer sentences than Villanueva. They reassured her that it was understandable to be feeling the way she was, and now two years later, Villanueva says Ashley and Jaki are her best friends, replacing the support system she had formed in prison.

According to Villanueva, it was the relationships that she established through IOW that prevented her from reoffending. She has since enrolled in college, majors in computer information technology, and plans to continue working with IOW for the foreseeable future.

“I enjoy it so much because as a former IOW alum, I know the hardships that I endured and what I needed that I didn’t necessarily have when I first came home,” Villanueva said. “A lot of youth reoffend because they don’t know the process out here or it’s too hard for them.”

There are many more positive outcomes stemming from IOW that are similar to Villanueva’s story. According to Wu, 90 percent of IOW alumni program participants are actively enrolled in educational programs or employed.

Meeting Kids Where They Are

IOW writing classes give students a voice through pen and paper, empowering them, and giving them a chance to learn about themselves. Teachers are not there to grade or assess, but encourage students to be authentic with what they are trying to express.

Teachers have the flexibility to choose the subjects and themes they’d like students to explore, but each class generally starts with an introduction and discussion regarding the week’s topic. Students then have a chance to write about their reactions and thoughts before coming together at the end to share what they’ve written. Classes are held weekly with each class lasting about 90 minutes. 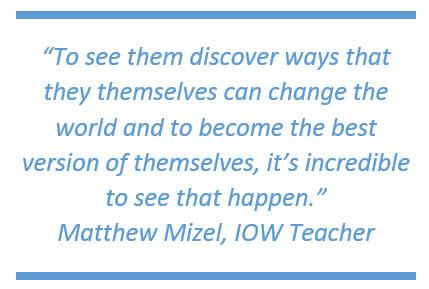 Matthew Mizel has been volunteering as a teacher with IOW since 2003 and he is a huge fan of hip-hop. For his classes, he’ll often bring in song lyrics, and then have the students listen to the song and read the lyrics before they write about their interpretation of the artist’s message or try to follow the artist’s format.

What’s unique about IOW, Mizel said, is that teachers aren’t judging students or telling them that they’re wrong. Instead, IOW focuses on a student’s strengths and values them in a way that they have not been historically valued. This is particularly important, since many of Mizel’s students come from disadvantaged neighborhoods, which he said plays a large role in why they end up where they are.

“To see them discover ways that they themselves can change the world and to become the best version of themselves, it’s incredible to see that happen,” he said.

Mia Foreman, a teacher with IOW since spring 2016, will generally ask students to consider a topic surrounding self-confidence and self-appreciation. Not only is writing an opportunity to build self-confidence, Foreman said, but it holds students accountable for their future as their goals and desires in life are written down, not just spoken or thought of.

“There are so few programs like InsideOUT Writers that are happening in juvenile centers across the nation that I think this is a case study of what is successful and I’m hoping that other systems will look into investing in similar programs,” she said.