On Friday, January 26, 2007, Lieutenant Carlos Thompson of the Mobile County (AL) Sheriff's Office attempted to perform a traffic stop on a vehicle matching the description of a suspect vehicle involved in an armed robbery. The driver subsequently fled the scene at a high rate of speed. At an intersection, the driver ran through the stop sign, made a 180-degree turn, and stopped his vehicle, facing Lieutenant Thompson. The suspect began firing an assault rifle, striking Lieutenant Thompson and seriously wounding him in his lower leg and hip, rendering him unable to exit his patrol car. While returning fire, Lieutenant Thompson was struck in the right elbow by gunfire, which forced him to reload his weapon with his weak hand to continue to return fire. As the suspect approached on foot, Lieutenant Thompson, using his weak hand, was able to fatally wound the suspect. Though seriously injured, Lieutenant Thompson was able to direct his fellow deputies arriving on the scene, ensuring that the area was secure and any evidence was protected. 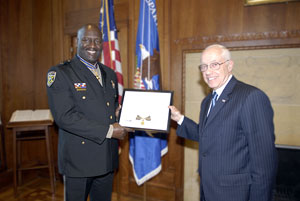