Paramedic Unit 3 medics, James "Jim" Ahern and his nephew John "Jack" Ahern, responded to an emergency report of a man underneath a subway train at the Massachusetts Bay Transportation Authority. James and John Ahern arrived and found a male, still alive, with his torso and lower extremities entrapped in the undercarriage of the train that struck him. Authorities ordered all persons out of the pit because of the unstable position of the train, fearing that it would shift as it was lifted off the track bed, potentially crushing anyone who remained in the pit. The additional complication of intubating the victim to control his respiration was handled manually by James Ahern who positioned himself in front of the victim, ventilating him and shielding him from the train. As the train was lifted, it shifted toward John Ahern and the victim. Once the train was lifted off the track bed, John Ahern crawled back under the train and assisted James Ahern in extricating the victim. 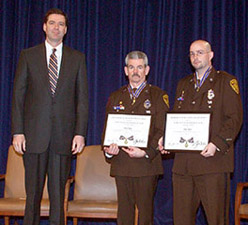