On March 11, 2004, during a warrant search of a drug house, the entry team encountered four individuals. While securing the individuals the team began taking fire from an unknown suspect. One agent was shot in the lower part of the body, and another was hit in his helmet. Agent Phillips witnessed the two agents going down and advanced through a blind hallway seeking the suspect and returning fire. Upon reaching the room where the suspect was hiding and observing the suspect armed with a rifle, Agent Phillips fired, causing the suspect to drop his weapon and surrender. Agent Phillips apprehended the suspect and protected his fellow agents from further harm. The wounded agent later recovered from his injuries. 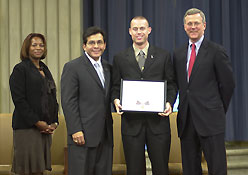