Officer Barry Ralston responded to a call regarding a suspect chasing a woman through a parking lot and shooting at her vehicle. The suspect shot several times into the victim's vehicle, where her children, ages two and four, were seated. The suspect rammed the woman's car to keep her from fleeing and then jumped onto the car's hood pointing a shotgun at her through the windshield, telling her that he was going to kill her. The victim, attempting to shield her children when the suspect was fired upon and distracted by other officers, was grabbed by the suspect. The suspect placed the shotgun to her back and took cover between the parked cars. When he arrived on the scene, Officer Ralston approached to within 15 yards of the suspect, fired at and struck the suspect who then released the victim. Though the suspect had fallen out of Ralston's view, Ralston continued to advance among the parked cars. As the suspect took aim at another responding officer, Ralston fired, wounding and disarming him. 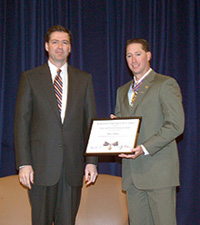