On Monday, February 19, 2007, Officer David Goitia of the Glendale (AZ) Police Department, and his partner Officer Anthony Holly, stopped a car, which had fictitious license plates and was occupied by three subjects. A male passenger, who had falsely identified himself, was being extracted from the car for further investigation when the subject suddenly produced a gun and fired at Officer Goitia's partner, Officer Anthony Holly, fatally striking him in the head. A gun battle then raged along the street for more than 50 feet, during which time the assailant, a wanted felon, fired multiple shots at Officer Goitia, who returned fire and struck the suspect in the leg. Still armed, the assailant crawled away while continuing to fire at Officer Goitia. Officer Goitia, with little regard for his own safety and at great risk, abandoned the cover of a nearby car to return to Officer Holly's side to render aid. Knowing that Officer Holly was critically injured, Officer Goitia dragged his wounded partner for more than 50 feet out of the line of fire and to a position of cover. He then directed emergency services to evacuate Officer Holly to a nearby fire department unit. Efforts to save Officer Holly were, tragically, not successful as he had died instantly. The assailant was subsequently taken into custody. 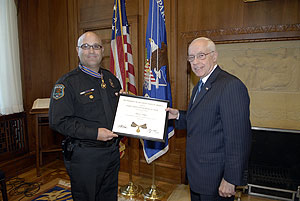