On April 7, 2005, Battalion Chief Gene F. Large, Jr. of the Fort Walton Beach, Fla., Fire Department was dispatched to assist in an ocean surf rescue. Three firefighters and a sheriff's deputy were attempting to rescue a swimmer caught in a rip current among six- to-eight foot waves, which had pulled all five away from shore. Neither the Coast Guard nor the fire rescue craft were able to attempt a rescue in the high waves. Two of the rescuers were losing consciousness from cold and exhaustion. Large swam a rescue board--a maneuver not usually attempted in such rough seas--and instructed the five to lock arms while holding on to the board. Large was able to break the rip current's hold and maneuver the five safely to shore by coordinating their kicking to work with the waves. Large's quick thinking and exceptional courage, while exposing himself to great risk, saved five people whose lives were at grave risk. 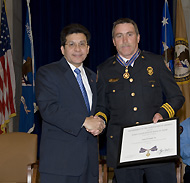