On May 5, 2004, Deputy Fulford-Salvano responded to a burglary in progress call after an 8-year-old boy called to inform the police that "strange men" were in his home with weapons and that he and his sister were hiding inside a van in the garage. Deputy Fulford-Salvano, first on the scene, entered the garage to check on the child and his sister who were still hiding in the family van. As deputies took positions, two men emerged from the house and fired upon the deputies. Deputy Fulford-Salvano became trapped in the garage between two vehicles and the assailants who were firing on her position. Deputy Fulford-Salvano then returned fire. Although she was struck a total of ten times, including in her shooting hand, she was able to retrieve her weapon with her other hand and continue firing until both gunmen went to the ground. The assailants were apprehended and the children were kept safe and unharmed throughout the incident. 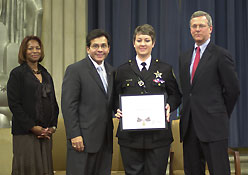