On September 7, 2009, Officer Julie Olson was called to assist North St. Paul Officer Richard Crittenden. A woman had called the police concerned that her estranged husband had returned to her apartment and might be inside. North St. Paul's police department had dealt with the suspect several times in the past, including as recently as the previous night when the suspect fled before squads arrived. The woman had an Order of Protection against the suspect.

The suspect then turned the gun on Officer Olson. When Officer Olson heard one round sail past her ear, she responded as she had been trained, and side stepping and returning fire. Another round struck Officer Olson's spare magazine on her duty belt, shattering it and causing pieces of the round to enter her strong-side arm. Now injured, Officer Olson returned fire on the suspect, striking him five times. While under the extreme pressure of the moment, she had the wherewithal to do a combat reload as she backed out of the apartment, only to find she had attempted to reload with the shattered magazine. She subsequently dropped the shattered magazine and reloaded with another magazine, as Officer Lonn Bakke entered the apartment building. Officer Olson and Officer Bakke then re-entered the apartment to disarm and handcuff the suspect, who subsequently died at the scene. 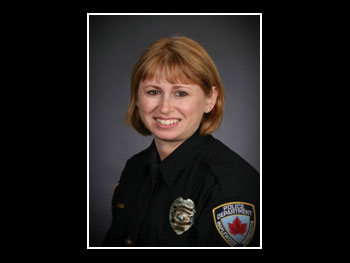