Firefighter Fitzhenry was dispatched to a residence on fire. When he approached the scene, he was told that a woman was trapped on the second floor and, because of the intense heat, could not be reached through the stairwell. Fitzhenry grabbed a ladder off the truck and threw it against the building, reaching a closed window. He pushed in the window and crawled through the intense heat and heavy smoke to enter the room, putting himself in the direct path of the advancing fire to locate the victim. After finding the victim unconscious, he dragged her to the open window and lowered her out. Due to the rapidly deteriorating conditions, Fitzhenry dove out of the window to safety. He rejoined his crew and continued to combat the fire. Fitzhenry suffered second degree burns. 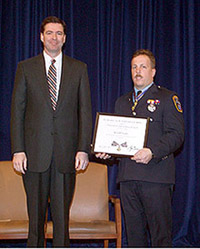