Officer Michael Muniz responded to an emergency call regarding gun shots fired at a restaurant. Before receiving the call, three of his fellow officers had been seriously wounded by an armed suspect. When he arrived at the scene, the suspect, who was advancing toward the wounded officers immediately turned his weapon on Muniz. Muniz was struck several times by the gun fire. Though wounded, Muniz drew his service weapon and returned fire, hitting the suspect. Both Muniz and the suspect continued to fire, while advancing toward each other, with multiple shots fired at point blank range. Muniz sustained four gun shot wounds before incapacitating his assailant. 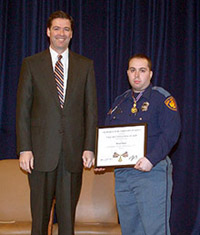