On Friday, October 13, 2006, then Detective Miguel Galvez of the Opa-Locka, FL, Police Department and Detective Raymond Robertson of the Miami-Dade, FL, Police Department were engaged in surveillance activities for a narcotics operation. Having received information that large quantities of narcotics and firearms were being stored in an abandoned apartment in the area, they drove to the apartment complex's parking lot. A subject approached their vehicle holding a firearm. Detective Robertson attempted to back out of the lot, but another vehicle blocked their route of escape by intentionally rear-ending their vehicle. The initial subject then opened the driver's side door and began firing his weapon. During the subsequent exchange of gunfire, the subject was hit once in the abdomen and fell to the ground a short distance from the driver's side door of the detectives' vehicle. While lying on the ground, the subject continued to fire shots in the direction of the detectives' vehicle. At this point, two additional subjects began shooting at the detectives. Still trapped inside their vehicle, the detectives were now being fired at by three subjects simultaneously.

The initial subject attempted to run from the scene and was found dead in the rear of the parking lot. After an extensive and in-depth investigation, the two additional subjects were identified and arrested, and were awaiting trial at the time of this nomination. Both subjects had extensive criminal pasts. Detective Raymond Robertson is also a recipient of the 2006-2007 Medal of Valor. 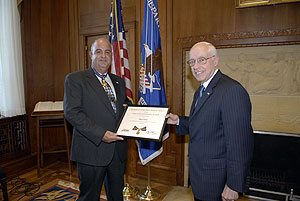