On June 7, 2009, a subject arrived at his estranged wife's residence in Nazareth, Pennsylvania. After threatening his wife with a handgun, the subject abducted his 9-year-old son and fled the scene in a black Honda Civic with his son seated in the right front passenger seat. The Nazareth Borough Police Department became involved in a high speed pursuit of the subject. Troopers Joshua D. Miller and Robert K. Lombardo, as well as other Swiftwater Station members and local police department officers, assisted in the pursuit. The pursuit went on for some 40 miles and ended on State Route 611 in Coolbaugh Township, Monroe County, Pennsylvania, when Trooper Miller employed the PIT maneuver to bring the vehicle to a stop. The PIT maneuver is a method by which the pursuit car forces the other vehicle to abruptly turn sideways towards the direction of travel. This causes the driver to lose control and stop.

Recognizing that the child was in extreme peril, Troopers Miller and Lombardo immediately approached the driver's side of the Honda in an attempt to arrest the subject and rescue the child. Troopers Lombardo and Miller both used their collapsible batons to shatter the driver's side window of the Honda. The subject then fired three shots from a 9mm Taurus, striking Trooper Lombardo once in the left shoulder, and Trooper Miller in the right thigh and neck. Troopers Miller and Lombardo returned fire, striking the assailant eight times. The force of the impact of being shot spun Trooper Lombardo to his left. Despite knowing Trooper Miller was wounded and his own left arm was now paralyzed, Trooper Lombardo did not seek cover. Trooper Lombardo chose to continue to engage the assailant with one arm. Only after the threat was neutralized did Trooper Lombardo seek treatment for his wounds. The suspect's son was rescued uninjured.

Trooper Miller gave his life and Trooper Lombardo risked his life to rescue the 9-year-old boy. They were/are dedicated officers of the law, committed to serving the citizens of the Commonwealth of Pennsylvania. 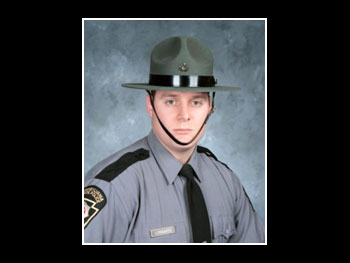 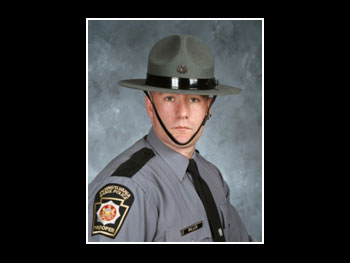