On August 18, 2004, Officer Peter Alfred Koe of the Indianapolis, Ind., Police Department received information over the radio that several fellow officers had been shot, one fatally, by a rampaging gunman. Koe and other officers went immediately to the scene, where Koe was shot by a hidden gunman. He suffered a leg wound while glass and debris struck him in the face and body. Out of concern for the safety of the other wounded officers, Koe advanced on the gunman, exchanging gunfire at close range and effectively subduing him. Even after the event, Koe directed medical responders to attend to his fellow officers while minimizing his critical wounds. Officer Koe showed remarkable composure and control while protecting his fellow officers. 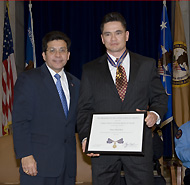