On February 25, 2010, the Fresno County Sheriff's Office attempted to serve a search warrant in the town of Minkler. As deputies attempted to breach the main door of the residence, they came under intense gunfire from within the building, which fatally wounded one of the deputies. The deputies immediately broadcast "shots fired" over the radio.

Officer Haller monitored the "shots fired" call over the radio and responded to the scene. Upon arriving at the scene, he heard gun shots. Officer Haller stopped his patrol vehicle and engaged the suspect in gunfire. Fellow California Highway Patrol Officer Rivera arrived and took cover behind Officer Haller's patrol vehicle. Both officers were engaged in gunfire with the suspect for an undetermined amount of time until someone on scene gave a "cease-fire" command. This was followed by approximately 30 minutes with no shooting.

The suspect again began firing from within the home. Fearing for their safety and the safety of the other officers at the scene, both Officers Rivera and Haller returned fire. During this exchange, Officer Rivera overheard someone say, "Officer down!" and moved toward the location of the downed officer. He found the downed officer on the passenger side of a marked patrol vehicle. Officer Rivera recognized the fallen officer as Officer Javier Bejar of the Reedley Police Department and attempted to remove him from the line of fire. The suspect began shooting directly at Officer Rivera as he attempted to rescue the downed officer. Seeing this, Officer Haller broke cover and moved into the line of fire. He engaged the suspect and provided cover fire to assist with the removal effort.

Officer Rivera was able to move the downed officer to a location of cover. Although Officer Bejar did not survive his injuries, Officers Rivera and Haller exhibited great personal courage, while putting themselves in danger in their efforts to save Officer Bejar's life. The assailant in this incident subsequently committed suicide by shooting himself prior to the officers' entry into the residence. 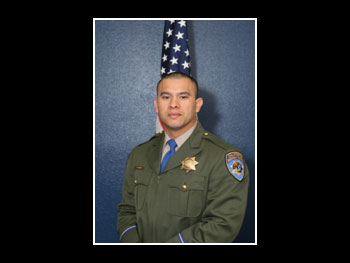