On March 13, 2011, Deputy William Stiltner was at home when he heard through his scanner that two fellow officers were shot while responding to a larceny call at a local salvage yard. Deputy Stiltner headed to the scene to find that a sniper was shooting from the woods above the salvage yard, and both officers were lying on the ground. Without hesitation Deputy Stiltner along second deputy went to aid their fellow colleagues by trying to move them out of the range of the shooter and into safety. As the deputies carried fallen Deputy Rasnake to a nearby car, a shot rang out from behind them. The car window shattered and Deputy Stiltner fell to the ground fatally wounded.

Shortly afterwards, Deputy Cameron Justus, who was also off duty, heard that a gunman had shot three of his fellow deputies, and that officers were trapped at the scene by the gunman. By the time Deputy Justus arrived at the salvage yard, he already knew the gravity of the situation. An unknown assailant armed with a high-power rifle had taken refuge in the tree line behind the property. This skilled sniper who had already shot three deputies multiple times, had the advantage of being perched above them on the mountainside. Deputy Justus met with Sheriff Ray Foster and both officers took cover behind their vehicle. Armed with his M-16 rifle, Deputy Justus suddenly spotted a shadowy figure in the pine trees. He called out to the sheriff that he had the man in his sights and was going to take the shot. Just as Deputy Justus pulled the trigger and the bullet erupted from his rifle, simultaneously the sniper fired from his weapon, fatally wounding Deputy Justus. After refusing to surrender, the assailant was shot and killed by other deputies on the scene. 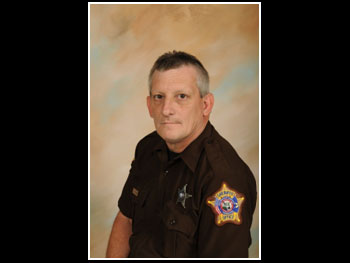