On February 13, 2004, police, fire, and emergency services were dispatched to assist a woman lying outside with gunshot wounds to the head. The suspect, concealed inside the house, began to shoot at the team of public safety officers assembled. Six of the fire and emergency services team were pinned down by the suspect and two were shot (one was fatal). Officer Richards, noticing that the firefighters were unable to move to safe positions, drove his police cruiser directly into the line of fire, in an attempt to shield the wounded firefighters from the assailant's shots. The suspect fired again, shattering the cruiser's window, narrowly missing Officer Richards. The suspect then ceased firing, but Officer Richards remained with the firefighters until they could be safely evacuated by a police extraction team. 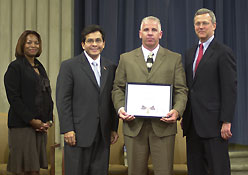