On March 18, 2005, a citizen flagged down Officer Timothy Greene of the Rock Hill, S.C., Police Department to report a bank robbery. Upon his arriving at the bank, employees identified the fleeing suspect's vehicle, which Officer Greene stopped. The suspect, however, exited the vehicle and fired at least six rounds from a semi-automatic pistol at Greene, injuring him and shattering his patrol car windshield. Greene pursued the suspect, provided details of the event and gave directions to other responding officers in spite of suffering cuts and abrasions to his face and having been shot at least 20 times before the suspect was finally overpowered. Officer Greene maintained exceptional composure, presence of mind, and concern for the officers assisting him throughout the incident. 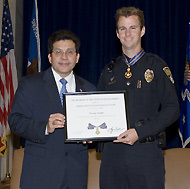