"Our family is very proud of the many great things that have been made possible by the grants given through the Edward Byrne Memorial Grant Program. Eddie was assassinated almost 20 years ago by a violent drug gang in New York City as he sat on patrol in a marked police car, guarding the home of a cooperating witness. This program, named to honor his sacrifice, has helped communities all over our nation become safer and better places to live and work. The Edward Byrne Memorial Grant Program will continue to help communities for years to come." 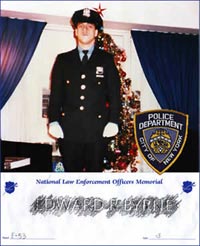 Edward R. Byrne was destined for a life in law enforcement, having a father who was an officer with the New York City Police Department. Born on February 21, 1966, Eddie-as he was known by family and friends-was an outgoing and friendly person who had a strong calling to public service and wanted to make his city, New York City, a safer place. In 1986, Eddie became a New York City Transit Police Officer, to help ensure the safety of New York City's subway commuters. In 1987, Officer Byrne joined the New York City Police Department's finest, assigned to the 103rd Precinct. Well liked by his brothers and sisters in blue, Eddie was passionate about his job and loved the opportunities it offered him to interact with the people he had sworn to protect.

In the early morning hours of February 26, 1988, Officer Byrne was on detail protecting a witness who had agreed to testify in court against local drug dealers. Officer Byrne was in his patrol car outside the witness' home around 3:30 a.m. when two armed gunmen crept up to his car from both sides. One of the men knocked on the passenger-side window to distract Officer Byrne just as a second perpetrator ran up to the driver's side window and, without uttering a sound, opened fire. Officer Byrne was shot five times in the head. Both gunmen, along with two other perpetrators who served as lookouts, fled the scene. Officer Byrne was rushed to Mary Immaculate Hospital where he died of his wounds. He was only 22 years old.

The four assailants were captured six days after the murder and were eventually sentenced to 25 years to life. They were members of a gang who had been instructed by a jailed drug kingpin to kill a police officer.

NYPD lost one of its finest that day, and Eddie's family lost a loved and cherished son and brother. Leaving behind his parents and three brothers, Eddie's brothers have continued the family tradition of law enforcement and justice by dedicating their careers to the field.

BJA is honored to administer "Byrne" funding to communities nationwide in memory of Officer Byrne.